Forsyth Park, established in 1841, is a premier example of the role of landscape architecture and urban planning in the United States during the nineteenth century. The Park is a very early example of a rapidly urbanizing community developing a central park dedicated to public use.

Older than either Central Park or Prospect Park in New York City, Forsyth Park is a very early expression of the American Public Park Movement, where communities constructed public open spaces as retreats from urban life. Forsyth Park offered the residents of Savannah, the thirty-third largest city in the U.S. in 1840, a carefully conceived and constructed open space for residents seeking both passive and active recreation.

William Brown Hodgson (1801-1871), the distinguished American diplomat and scientist, conceived of the idea for Forsyth Park and set aside ten acres of woodland to create the first recreational park on the southern edge of Savannah in 1841. In 1851, City of Savannah officially designated Forsyth Park as a public park on the edge of the original boundaries of the city laid out by General James Edward Oglethorpe (1696-1785) in 1733. In 1851, the City described the park as “All that portion of said Ward lying between Gaston Street on the north, Drayton Street on the east, a new street on the south (Hall Street) and Whitaker Street on the west—or what we usually call Forsyth Park.”

On January 26, 1858, the Savannah City Council passed a resolution calling for new paths to be added to the park to facilitate public use. In March 1858, the Council appointed a committee to purchase and install a fountain to become the focal point in the park; and in July 1858, the City installed the large, cast iron fountain, manufactured by the historically significant iron foundry Janes, Beebe & Co. The City awarded Wilhelm Christian Bischoff (1791-1881) the commission to layout Forsyth Park. Bischoff was Royal Court Gardener at Nymphenburg Palace near Munich until his retirement in 1852, after which he moved to Savannah, establishing a nursery, tree farm, and agriculture school.

In 1861, the City dedicated the open area adjacent to and south of Forsyth Park for military use as a parade ground. In 1867, the City added this area to Forsyth Park; it became known as “Park Extension” or “Forsyth Extension.” Since 1867, the boundaries of Forsyth Park have remained unchanged. After the Civil War, the city of Savannah continued to expand towards the south and the resultant residential districts developed around Forsyth Park and Forsyth Extension. With Forsyth Park serving as the central park of the expanded city limits, the newly developed sections of Savannah depart from the Oglethorpe’s original layout that featured city blocks organized around open green squares. In the later 3 decades of the 1800s, the City and various civic organizations added significant monuments and sculptures to the park, including the Confederate Monument (1874), designed by Robert Reid and featuring a sculpture by David Richards.

In 1915 the City of Savannah constructed Forsyth Fort to serve as a training facility for the Savannah Volunteer Guards. There are two, similar buildings on the eastern and western sides of the central walkway that bisects the park. These buildings are located on the southern edge of the oldest section of the Park and on the northern edge of the open fields that are a major feature of Forsyth Extension. Originally constructed for the Volunteer Guards to use in artillery exercises, these buildings have housed various uses over the years. The Trustees’ Garden Club refurbished the western building and planted the Fragrant Garden in the building’s interior courtyard in 1963. The eastern building was renovated into a Café in the early (2000s). The Forsyth Park Amphitheater was added in 2005.

Forsyth Park is a historically significant landscape and one of the premier examples of public-park planning in the United States in the nineteenth century. Forsyth Park also has a remarkably high degree of historic integrity. The boundaries of the park have remained unchanged since its creation. The design of the current circulation system reflects its 1850s layout and is virtually unchanged from 1903. The existing monuments and historic buildings were also all in place by 1903. Many of the mature trees are historic, some appearing in photographs of the park from the 19th century. 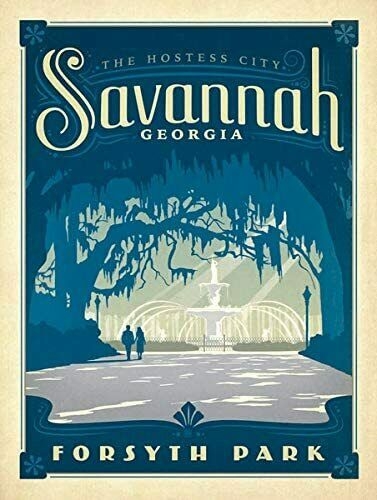